One of the best ways to steadily increase your stack in the later stages of a tournament is to punish villains who steal too much and steal from villains who fold to steals too much.

By using the ProPokerHUDs MTT HUD this will be easier than ever before. Our graphical popups will show you exactly who is opening too wide in later positions and will make it easier for you to decide who to steal and resteal from.

The first thing you could look at when deciding who to steal from or who to 3Bet against, would be to look at the steal and vs steal badges.

The Steal Badge – shows how often someone steals and how often they fold vs 3Bets.

As we can see, this villain steals a lot (71%) and folds to 3Bets a lot (65%), so we should be going after this players late position opens by 3Betting wide.

The vs Steal Badge – shows how often someone folds to steals and how often they 3Bet vs steals.

We can see that this villain doesn´t like to fold a lot to steals and 3Bets. We can combat this by 4Betting him wider and flatting more 3Bets in position.

Next, lets take a look at more specific late position steal stats. For that we have the Late Position Steal popup. 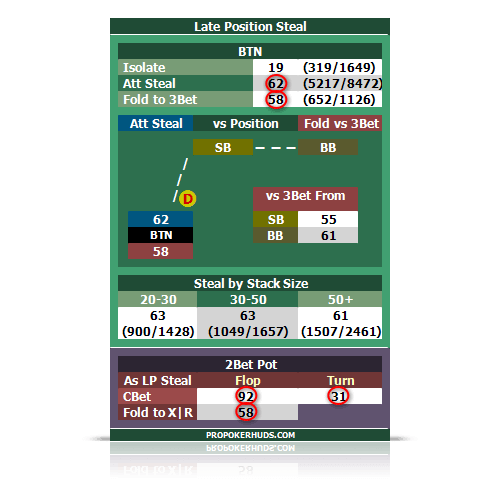 As we can see from the Late Position Steal popup – our villain is stealing 62% (5217/8472) from late position when having over 20 BB. Villain also folds to 3Bets 58% so combining his wide stealing range and fold to 3Bet we should go after his steals a lot more by 3Betting. We can also see that villain Cbets 92% of flops, but only 31% of turns, so we should call Cbets on the flop more often to see if he slows down on the turn and then lead on the river to steal the pot. Villain also folds to checkraises 58% on the flop, so checkraising with draws and low showdown value hands could be a good option to put pressure on our opponent. If we get called, we can give up if we don´t have any showdown value, because our villain most likely does.

To help us decide in 3Bet pots if we should CBet or rather give up postflop vs a villain, we can use the Vs 3Bet Popup.

As we can see, villain folds to Cbets in 3Bet pots 44% on the flop, 52% on the turn and 40% on the river. He raises flop CBets quite a bit, 19% so it might be a good idea to check back some hands that we need to pot control(that can´t stand getting raised, like middle pairs). If we are CBetting the flop and he just calls, then by betting half pot on the turn we would be making a +EV bet, because villain is folding 52% and we only need our bet to work 33%.

Now lets take a look at how villain plays vs late position steals. For that we have the Vs Late Position Steal popup. 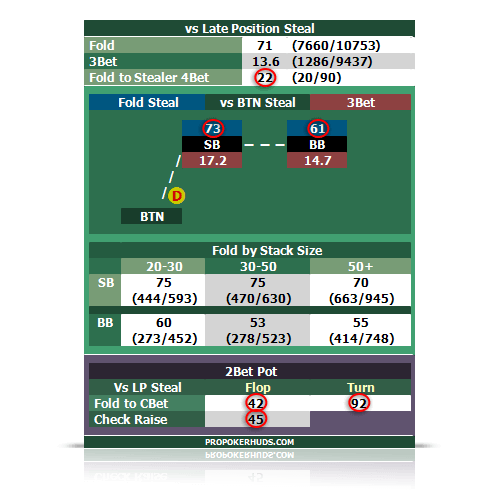 We can see that villain folds 73% from the SB and 61% from the BB vs late positions steals. If we have a tight BB and villain is on the SB, it might be a good idea to open up our button range. Villain likes to 3Bet quite a bit from the blinds vs a steal and doesn´t like to fold to 4Bets (22%), so we can play our value hands fast. Villain only folds to 42% of the flop cbets, but 92% on the turn, so when villain only calls on the flop, we should be betting almost every turn. We can also see that villain checkraises the flop 45%, which means his checkraising range should include almost every pair and draw, so we can continue with a lot of our range and make villains life difficult on the turn.

Because most of the time in MTTs and MTTSNGs stacks will be small, it is important to know how villains play shortstacked, for that we have an excellent shortstack popup. 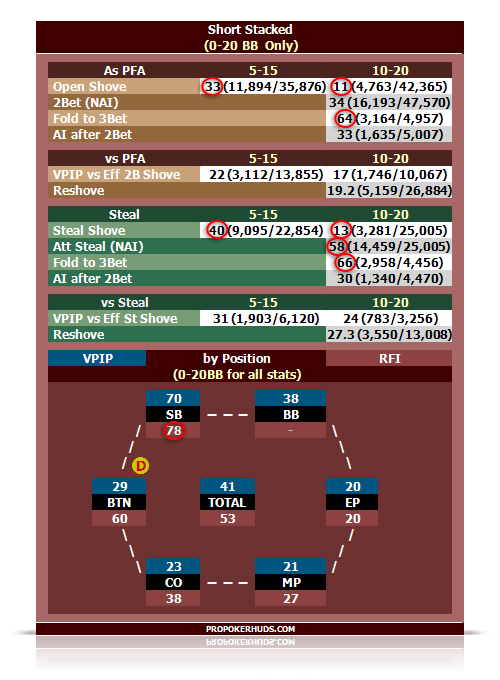 We can see that villain open shoves 5-15BB avg stacks 33% of the time and 10-20BB avg stacks only 11% of the time. He also folds to 3Bets 64% – so when villain does open with shorter stacks, we should 3Bet wide. With 5-15BB stacks villain steal shoves 40%, which means we should be calling him with quite a wide range. With 10-20BB avg stacks he only shoves 13% and vs that range we should be tightening our calling range quite a bit. Villain likes to steal none all-in 58% and folds to 3Bets 66%, so we could shove a lot vs his late position steals. Villain steals 78% from the SB, so vs his SB opens we should play a very wide on the BB.

There is currently a 30% discount on all of our PokerTracker 4 HUDs with the coupon code sale30. This offer is valid until the end of July.

Get Our Amazing MTT HUD for as Little as $21